The race for the NBA playoffs is one that excites every year. Last year’s Western Conference was the first year the 8th seed was decided by a play-in game. While the race in the West has provided fans with down-to-the-wire finishes, the Eastern Conference has failed to incite as much excitement. The 8th seed in the East last year, the Orlando Magic, would have finished 10th in the West with their record. The top seven teams from last year in the East will make the playoffs again in all likelihood. However, after some key offseason moves, more teams have put themselves in contention for that final spot in the playoffs. Here are three teams in contention for the 8th seed in the East.

Like the Bulls, Washington has continued to make solid transactions in both the offseason and drafts in the last couple of years. A recent trade for Russell Westbrook may be enough to push the team over the top and into the playoffs.

In one of the most significant moves of the offseason so far, the Houston Rockets traded Westbrook to the Wizards in exchange for point guard John Wall and a first-round pick in 2023. At first glance, the move appears to be a like for like deal between both teams. While Wall and Westbrook are similar players, Westbrook brings more upside at this point in his career.

Wall is coming off consecutive season-ending injuries. His last appearance in an NBA game was on December 26, 2018. Wall’s talent is undeniable as he is a 5-time All-Star. However, the injuries are hard to ignore and could have a massive effect on his game. Wall relied heavily on his speed to create baskets in the open court and in transition. After a devastating Achilles injury, it remains to be seen if Wall can still play at that lightning-fast pace.

Westbrook spent last season alongside Rockets superstar James Harden. While Daryl Morey’s latest experiment appeared exciting initially, it did not have the intended results as the Rockets fell short of the playoffs once again. Westbrook needs the ball in his hands to be his most effective. With a large part of Houston’s offense based around Harden isolations, The Rockets took Westbrook’s best attribute away from him. His assists per game last year was the lowest it’s been since the 2013-14 season.

The pieces surrounding Westbrook on the Wizards roster arguably are better fits than the players Westbrook had on the Rockets. While he is no James Harden, Wizards shooting guard Bradley Beal is one of the league’s most talented players. His 30.5 points per game last season was second in the league behind only Harden.

Beal is arguably a better fit alongside Westbrook than Harden was. He averaged 0.92 points per possession as an off-screen shooter. Off-screen shooting accounted for 11.6% of all Beal’s attempts last season. In comparison, just 0.7% of Harden’s shooting attempts last season came off screens. In fairness to Harden, the way the Rockets operated offensively, Harden was not asked to be off the ball for most possessions. However, now that Westbrook has an elite shooting threat who can be a threat off screens, it will provide valuable spacing that will allow Westbrook to operate better.

In addition to Beal, the Wizards have a trio of forwards in Rui Hachimura, Troy Brown Jr., and free-agent signing Davis Bertans. Hachimura and Brown Jr. showed significant and encouraging development over the season, and Bertans is a proven threat from the perimeter. Center Thomas Bryant and rookie lottery selection Deni Avdija also figure to play important roles in this upcoming season.

The most active of the three teams in the offseason, the Hawks finally appear ready to challenge in the playoffs after a 3-year drought.

The Hawks sent a clear message to the rest of the Eastern Conference this offseason: we are ready to compete. They started by signing Danilo Gallinari to a four-year, 61 million dollar deal. Gallinari, while often injured, can shoot the ball well and play solid defense. The other big-money contract was signing former Kings guard Bogdan Bogdanovic. Bogdanovic is one of the best 6th man in the league and shot 37.2% from 3 last season on seven attempts per game.

Hawks also found good value in the additions of Rajon Rondo and Kris Dunn. Rondo is coming off a championship season with the Lakers and will be a great mentor to Hawks star Trae Young. Dunn was an underrated pickup on a two year, 10 million dollar deal. He is one of the best defensive guards in the league and will add more defensive presence to the Hawks backcourt, something that was lacking for Atlanta last year. Rookie center Onyeka Okongwu will be the backup behind Clint Capela and will help to anchor the defense of the second unit for the Hawks.

On top of the offseason additions, each of whom will contribute to the team, the Hawks already have a plethora of young talent from last year. Trae Young, John Collins, Kevin Huerter, Cam Reddish, and Deandre Hunter showed flashes of potential last season that would excite any Hawks fan. Young and the uber-athletic Collins form a formidable pick and roll threat while surrounded by elite shooters in Huerter and Reddish. If each of those players makes a leap from their performances last year, the Hawks will be well on their way to the playoffs come the end of the season.

The Bulls have been quietly building one of the best young cores in the league. While they will not be competing for a championship this season, a potential spot in the playoffs is very plausible.

The Bulls have built around star shooting guard Zach Lavine. One of the NBA’s most underrated players, Lavine averaged 25.5 points per game last season while shooting 38% from 3 on over eight attempts per game. His 25.5 points per game were good for 11th in the league ahead of players like LeBron James and Jayson Tatum. Is that to say that Lavine is better than both of those players? Of course not. But the numbers speak for themselves, and Lavine deserves the respect of a superstar in the league.

Surrounding Lavine is a plethora of budding stars. In the backcourt, Lavine is accompanied by former UNC standout Coby White. An electric player in the open court, White was proficient in transition and showed creativity in the halfcourt. Forward Lauri Markkanen will also be integral to the Bull’s success this season. While he has struggled to stay healthy, he is a sniper from the outside and provides valuable spacing to the team.

Center Wendall Carter has also had issues staying healthy, having only played 43 games last season. However, he is an athletic big who moves well in space and has nice touch around the rim. Lottery pick Patrick Williams is limited offensively at this point in his career but plays with a high motor and can be a valuable defensive piece going forward.

The Bulls have made all the moves necessary to be genuine contenders in the East this season. If the young players continue to progress as they have and are healthy, the Bulls could find themselves in the playoffs for the first time in 5 years.

3 Takeaways from the Start of the NBA Season 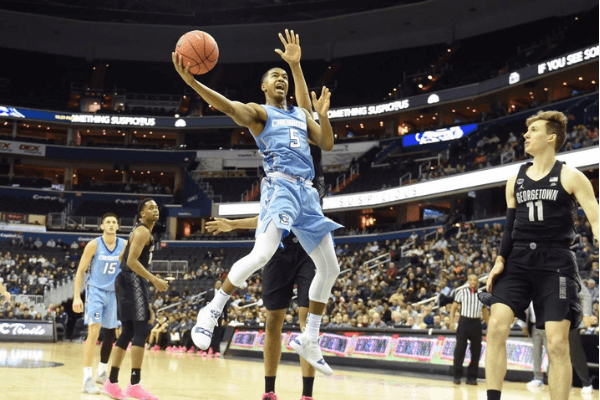