After over four long months of waiting, the NBA is finally back. 22 teams in the Orlando bubble will battle it out for 16 playoff spots in hopes of winning the 2020 NBA championship. The following 10 organizations are best suited to do so.

The Bucks should finish with the league’s best record for the second straight year, led by MVP favorite Giannis Antetokounmpo. The Greek Freak is just one of many key contributors for Milwaukee. He’s paired with Khris Middleton, an All-Star knocking on the door of a 50/40/90 season, as well as elite defenders and outside snipers.

Milwaukee’s defensive rating ranks 2nd all-time for a single season, only behind the legendary 1996 Chicago Bulls. Amazingly, Antetokounmpo, Brook Lopez, and Eric Bledsoe all have arguments for a spot on the All-NBA Defensive First team. The Bucks have been nearly flawless this year, especially in the bubble thus far.

Antetokounmpo’s past postseason struggles are tough to ignore, but this playoff run will feature a different version of the Greek Freak. He’s more experienced & skilled on offense and will be playing with a chip on his shoulder this time around.

However, LA hasn’t gotten much production from a third scoring option all season. This deficiency is especially noticeable when James sits. According to NBA.com, the Lakers scored just 105.2 points per 100 possessions with James off the court this season, tied for last in the league compared to other teams.

Luckily, the third option might be emerging. Dion Waiters averaged 13 in three scrimmage games, and JR Smith put up 20 points on 6/7 shooting from deep in a game without James and Davis. Kyle Kuzma also poured in 25 while going 10/14 from the field in a recent game. Either one of these players could be the last piece for a Laker championship.

On paper, the Clippers arguably have the best roster in the league. Kawhi Leonard is coming off an incredible championship win with the Raptors, where he scored the third-most points of all-time in a single postseason. He’s playing alongside two-way superstar Paul George and two 6th Man of the Year candidates averaging nearly 20 points per game in Lou Williams & Montrezl Harrell, amongst others.

So, with this type of roster, why aren’t the Clips higher? LA’s glaring weakness is their chemistry. The Clippers have dealt with Leonard & George making trips in and out of the lineup, and their trade deadline acquisitions weren’t given much time to mesh in the system thanks to the season’s sudden suspension.

To make matters worse, Williams, Harrell, Patrick Beverley, Landry Shamet, and Ivica Zubac all missed time in recent scrimmages and practices that would otherwise help build chemistry. With the playoffs not far away, the Clippers are running out of time to figure things out.

The Celtics’ top duo doesn’t stack up against that of multiple other contenders, but they certainly make up for it with their top trio. Jayson Tatum, Jaylen Brown, and Kemba Walker are on pace to become just the fourth set of three teammates to average 20 points per game in a season this century. Boston also ranks in the top-five for both offensive rating and defensive rating thanks to a great mix of on-ball scoring, off-ball scoring, and defensive versatility.

Boston’s biggest flaw is frankly tough to pinpoint. If anything, their weaknesses are less problematic than just about any other team in the bubble. The absence of a true superstar isn’t ideal, but Tatum’s recent growth as a player means he could take that next step in the postseason. He stepped up in Boston’s deep 2018 playoff run and has what it takes to do it again this year.

Despite losing Kawhi Leonard in free agency, the Raptors have the league’s third-best record entering the season’s continuation. Pascal Siakam picked up right where he left off after the 2019 championship with an All-Star appearance this year. The same can be said for the Raptors as a whole, who have seamlessly transitioned from life with Kawhi Leonard to life without him.

Toronto’s well-coached, disciplined, team-oriented, and hungry to defend their title. Still, it’s tough to view the Raptors as legitimate championship contenders when looking at their mediocre 11-14 record versus teams above .500. They’ll have a golden opportunity to dispel this narrative, as they play the Lakers and Bucks in their final few games.

The Heat are an intriguing dark-horse that can make a ton of noise come playoff time. It all starts with Jimmy Butler, who’s been instrumental as Miami’s leader in his first year there. He brings uncanny playoff toughness and experience on both ends of the floor.

Additionally, Bam Adebayo, Kendrick Nunn, Tyler Herro, and Duncan Robinson are just a few of the several players who have flourished in Miami this year. Mainly, Adebayo is a huge reason why Miami is in a prime position to make their first deep playoff run since the Big-3 era.

He’s averaging 16.2/10.5/5.1 at the pivot spot and complements it with elite & versatile defense. This defense has been extremely effective versus the Bucks and Giannis Antetokounmpo, whom Miami is 2-0 against this year. A 1-4 matchup between the Bucks and Heat looks very likely to happen and figures to be a competitive series. The Heat deserve to be taken seriously as a legitimate upset threat.

The Rockets turned heads at the trade deadline by sending center Clint Capela to Atlanta in return for stretch-four Robert Covington in a four-team deal. The trade meant that no player would top 6’7” in Houston’s small-ball starting lineup.

Offensively, the trade was a step in the right direction. Covington spreads the floor much better than Capela and fits right in with the Rockets’ offense. James Harden and Russell Westbrook will have even more room to operate.

Defense is where the problems lie.  PJ Tucker has played surprisingly solid defense for a 6’5” center, but it’s somewhat unrealistic to expect much out of him against elite interior bigs in a prolonged playoff series. Houston’s defensive communication has mitigated the problems posed by their lack of height, but some disadvantages are too big to overcome. That simply means offense is all the more critical.

2019-20 has been a season of under-achievement for Philly, who owns the East’s 6-seed. Ben Simmons still can’t shoot, Joel Embiid continues to struggle with injuries, and newly-acquired Al Horford has disappointed. But perhaps that can still change.

On the bright side, there could be some hope in an unexpected place. Second-year guard Shake Milton came on near the season’s suspension, including a 39-point outburst that proved he deserved permanent extra minutes. Coach Brett Brown took notice and recently named him the starting point guard, moving Simmons to power forward. Milton adds instant offense to the rotation, specifically in the form of ball-handling and outside shooting, two skills that have held Philly’s starting lineup back.

The 76ers’ talent is undoubtedly there. It’s just a matter of whether or not their stars can complement each other in the playoffs. Adding Milton to the starting five has the makings of a winning formula.

The Nuggets began scrimmage play with an unconventional starting lineup that featured three 7-footers. It’s unlikely the lineup will be utilized again now that guards Jamal Murray, Will Barton, and Torrey Craig are back in the rotation, but it was a fun experiment nonetheless.

Much of the fun came from 7’2” rookie Bol Bol. He put together a legitimate highlight reel in just three games of action. Bol ran the floor, pulled up from deep, and swatted shots with ease. With limited film to be used against him, he’ll pose a tough matchup problem for opponents down the stretch.

Running the point in that starting five was Nuggets star, and usual center, Nikola Jokic. The Joker was great in last year’s playoffs, posting a stat line of 25.1/13.0/8.4 while nearly leading Denver to the Western Conference Finals. Yet again, the offense will heavily run through, and depend on him as the primary orchestrator.

All in all, the Nuggets are a well-rounded team with little weaknesses. They’ll contend for a high seed in the West and compete in the playoffs, but their ceiling doesn’t stack up against the likes of the Lakers, Clippers, or Rockets.

The three-headed monster at guard (Chris Paul, Shai Gilgeous-Alexander, and Dennis Schroder) has the Thunder amid the most surprising season of 2020. All three guards are averaging over 17 points per game, with none falling below 51% effective field goal shooting.

Also contributing to the success is center Steven Adams. Adams doesn’t jump out on the stat sheet, but has had another promising year doing the dirty work for Oklahoma City. His importance will only be magnified once postseason basketball comes around.

But for the Thunder, the good comes with some bad. There’s a huge hole at the wing position that doesn’t look solvable anytime soon. Danilo Gallinari has been lights out at the four this year, but Oklahoma City isn’t getting any sustainable offense from a second wing player in their starting lineup.

Luguentz Dort, Terrance Ferguson, and Darius Bazley have garnered some minutes at the position, with none of them averaging over 6 points per game. The newly-returned Andre Roberson could also be in the mix and provide solid defense, but his offensive limitations only add to the problem.

This team will go as far as their guards can take them. 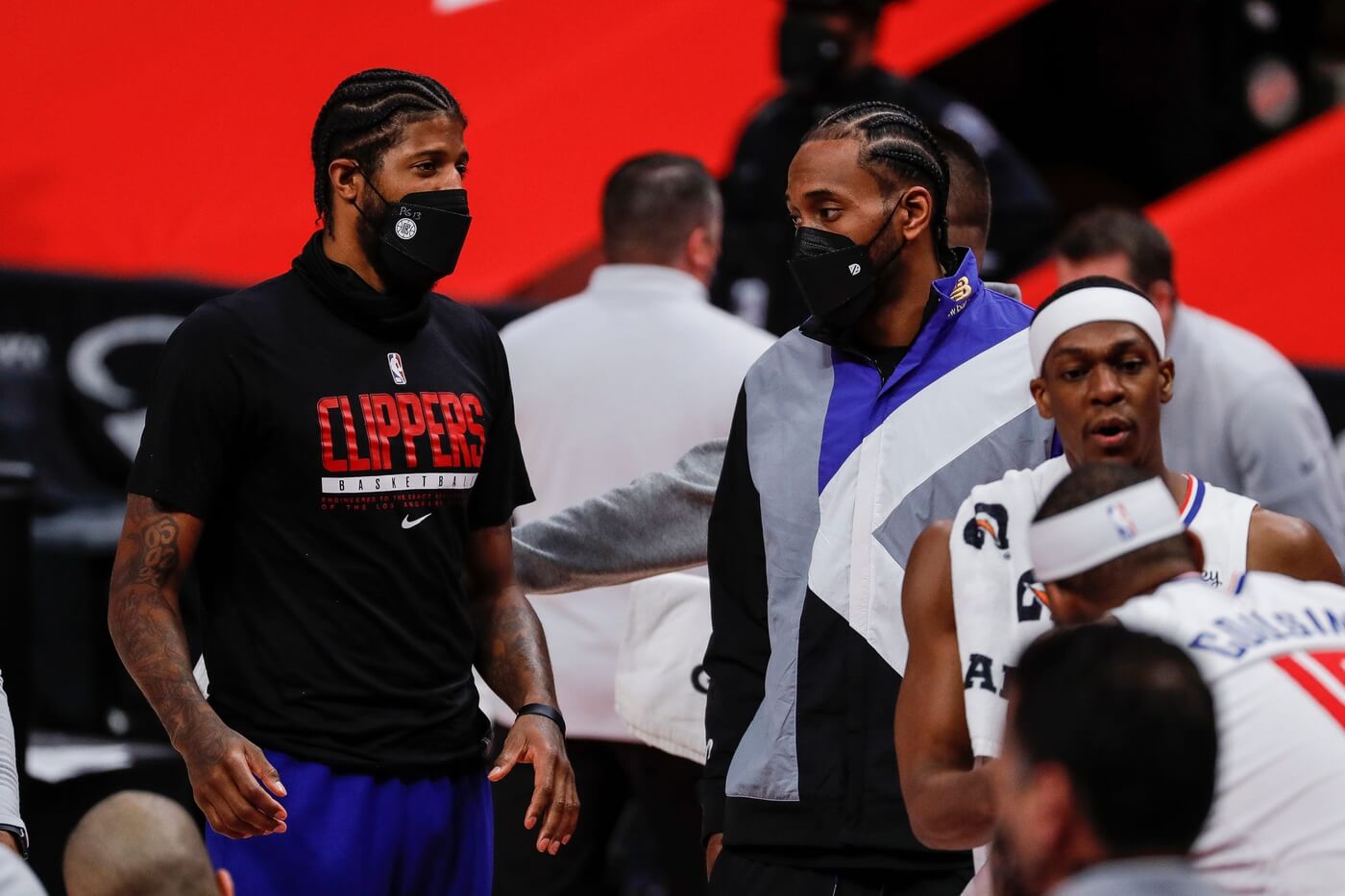